From 12 to 17 January, Prime Minister Shinzo Abe is going to visit Estonia, Latvia, Lithuania, Bulgaria, Serbia and Romania, six European countries for the first time as the Prime Minister of Japan. During this visit, to expand frontiers of Japanese diplomatic activities, he will discuss various international issues to closely collaborate with the six nations. He will be accompanied by an economic mission, comprising of 30 Japanese companies. His visit is expected to enhance concrete relations between Japan and the six nations.

The planned dates for PM’s visit in Lithuania are 12-13 January. During his stay in the country, Shinzo Abe will visit Lithuania’s capital Vilnius and second largest city Kaunas. In Kaunas, Abe will be paying tribute to Chiune Sugihara. Sugihara was a Japanese diplomat residing in Kaunas during the Second World War who saved thousands of Lithuanian and Polish Jews during the time by issuing vizas allowing them to escape the nazi regime. 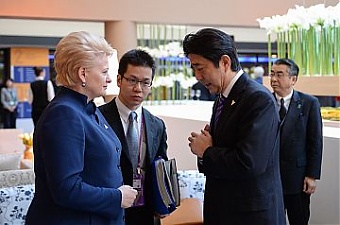 For enquiries relating to the Japanese delegation during the visit, please contact the temporary press working room on +370 5 2508014 (only in use on the 13-14 January).