Schedule of the event

This year marks the 25th anniversary of the diplomatic relations between Japan and Lithuania. To celebrate this occasion, the Embassy of Japan in Lithuania is going to organize a wide range of events in the country. One of the first events is going to be the 15th Japanese Film Festival which will start on January 22nd at „Forum Cinemas Vingis“ in Vilnius. The festival is organized by the Embassy of Japan, together with Japan Foundation and „Forum Cinemas Vingis“.

The theme of the festival is animation. This time a lot of attention will be given to the younger audience, however, due to unique style and interesting storylines Japanese animation can easily captivate a spectator of any age. During 6 days of the festival you will be able to see 9 different movies, that haven‘t been shown in Lithuania before. The movies will take you to the world full of fantasy and colors, and will present sincere, mysterious and fun stories.

The first movie to start the festival will be „Miyori in the Sacred Forest“, a story about a young girl who very unexpectedly becomes a guardian of the forest and together with magical forest creatures tries to save it from destruction.

On second day of the festival a nearly 40 years old animation movie „Science Ninja Team Gatchaman” will be presented. The movie is seeking to reveal the importance of a sustainable use of environment and technology for the development of the society, and is about 5 young superheroes who try to stop the villains from stealing Earth‘s natural resources.

January 24 will be dedicated to our youngest spectators and two movies will be shown. The first one is called “SOS! Tokyo Metro Explorers: the Next” which is about the adventures of 4 young friends who go on a treasure hunt in the underground of Tokyo metro. The second movie of the day “Komaneko –the Curious Cat” is a stop motion animation that presents a cute cat named Koma, which indulges in her own movie making process.

January 25 will be devoted to the older audience and will include 3 movies, which are different from the rest of the movies by their gloomy themes and mysterious storylines. The movies „Plan ZET“ and „Negadon. The Monster from Mars“ is created by the same director Jun Awazu, therefore, share similarities in storyline – both

Picture from animation “Miyori in the Sacred Forest”

movies will take you to the future where heroic sacrifices are necessary to save the Earth from destruction by mysterious creatures. The third movie of the day „Kakurenbo“ is going to invite you to play a secret game of hide and seek, where most of the players mysteriously disappear in the dark streets of the abandoned city.

On January 26 the fans of the alternate reality will enjoy the movie „The Place promised in our early days“. The movie is about Japan after the Second World War, which is occupied and divided by two competing forces. The festival will be ended by a famous Japanese animation movie called „The Girl Who Leapt Through Time“, a romance story about a young girl who gains the power of time travel and begins using the time-leaps to fix problems.

On January 22-24 before showing the movies you will have an opportunity to see kamishibai – a storytelling using pictures drawn by the school children of Vilnius. The pictures illustrate Japanese fairytales, which were translated into Lithuanian by Ms. Kotryna Šešelgytė and which will be delivered to the audience by Mr. Juozas Šalkauskas during these three days of the festival.

The entrance is free! Please collect your ticket 1 hour before the movie at “Forum Cinemas Vingis” ticket office.

More information about the film festival:

Embassy of Japan in Lithuania: http://www.lt.emb-japan.go.jp/itpr_lt/eventLT20160113.html

For more information about other cultural events please contact the Embassy of Japan: tel. +370 5 231 04 65, email: http://culture@vn.mofa.go.jp 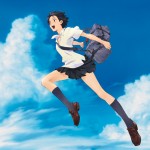 Picture from animation “The Girl Who Leapt Through Time”